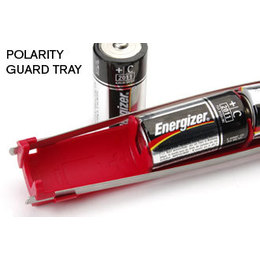 Products must pass a battery of rigorous tests conducted by safety agencies before getting a stamp of approval. When you're in a potentially hazardous environment, using a flashlight that carries these approvals is vital We feel that designing a flashlight that's safe to use in volatile situations should not be a feature. It's fundamental. That's why Pelican lighting tools are the most safety approved flashlights on the market. Innovations like our battery polarity tray makes operating a flashlight impossible if one or more cells are inverted. This also safeguards against dangerous "outgassing" of hydrogen from an accidentally reversed cell. Another industry first is the addition of gas-absorbing pellets to our lamp modules. It is a back-up system that absorbs excess hydrogen retained inside the flashlight. No gas, no spark.

Pelican Products, Inc. guarantees its lights for a lifetime against breakage or defects in workmanship. This guarantee does not cover the lamp or batteries. All warranty claims of any nature are barred if the product has been altered, damaged or in any way physically changed, or subjected to abuse, misuse, negligence or accident.